A unique project such as Occidental College’s solar array needed a unique design team, which the school found with Lettuce Office, a small firm comprised of three principals, two whom live in Highland Park.

Kara Bartelt and husband Michael Chung started Lettuce in 2004 with offices in Hollywood; they have since moved to downtown Los Angeles and added a third partner, Nico Saez. Bartelt and Chung have lived in Highland Park since 2006, having moved into the area because of “the great community and plenty of historic houses. We love seeing all the families walking their kids to school, too.”

The team jumped on the chance to create new thinking for Oxy’s installation of ground-based solar panels rather than the utilitarian designs that are typical for large scale solar projects. Bartelt, an adjunct associate professor at USC’s School of Architecture, is fascinated on the integration of technology and architecture in the environment.

“For us, this [project] was a perfect example of that blending,” she says.

First and foremost, the team wanted the design to be pleasing to the eye from whatever direction it was viewed. After the swooping curve pattern was approved, they painstakingly created intricate renderings and canvassed various neighborhoods to see how the finished product would be seen. That hard work is paying off, thinks Bartelt. 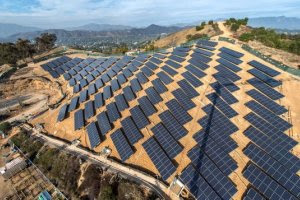 While some of the more than 5,000 panels are installed above a canopy over a campus parking lot, the most eye-catching element of the Occidental array will be the panels that are mounted two to three feet above the ground and  hug the topography a hillside  in a curving design based on a hysteresis loop, a mathematical expression that describes the result of an alternating magnetic field applied to ferromagnetic material.

Involved in the project for now three years, the team meets at the construction site every two weeks to make sure that the 20 x 30 foot panels are being installed according to plans. Joining them is Oxy’s Professor of Physics Daniel Snowden-Ifft, who has been involved in the project nearly since its beginnings.

“We have walkie talkies and go back and forth saying, ‘Tilt it to the left a bit, now up, to the right,’” says Bartelt about getting the angles just right.

Right now, the firm is active in residential and business designs as well as graphics for branding and marketing. While the Oxy solar array is scheduled to be completed this spring, Bartelt says the team would welcome more solar projects.

“It doesn’t take much to make a big impact,” she says. “I can’t wait to when that final panel is placed and it’s all done.”

Posted in The Eastsider LA.